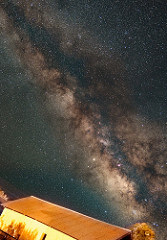 1980 – Congress designates the Langmuir Research Site, 31,000 acres in the Magdalena Mountains of the Cibola National Forest.

1982 – Concept for the millimeter array first developed by NRAO.

1998, April 8 – Briefing to Congressman Joe Skeen, who inspects the mirror.

1999, March 16 – Briefing to USNO Director Ken Johnston and his staff in Washington D.C.

2000, April 18 – MROC Agreement signed by NMT, NMSU, UPR. NMHU. Ceremony formally convening the MROC board of governors/directors in the presence of Congressman Joe Skeen. MROC incorporated as a not-for-profit company in New Mexico and designates a Board of Directors.

2000, April 19 – By-laws adopted at the first MROC board of directors meeting.

2000, August 17 – MROC submitted a statement (scope) of work to the SMDC in response to a request by the Department of Defense (DoD) for missile data testbed.

2002, December – Management reorganization for the project.

2003, February 19 – Review of the SAIC work plan by the USFS. Submission of the MRO Management Plan in response to concerns identified by the IDR team in October 2002.

2003, March 18 – Initial communication with the U.S. Fish and Wildlife Service on work schedule that accommodates breeding and nesting of the Mexican Spotted Owl.

2003, October – Attempted target date for completion of EIS (instead of February 2004).

2004, September – 2.4-meter telescope team signs contract with EOS Technologies (Tuscon, AZ) for the design and build of the telescope.

2006, September – 2.4-meter telescope installed at the site by EOS Technologies.

2007, March – 2.4-meter telescope astronomers, Dr. Eileen Ryan and Dr. Bill Ryan participate in the first science project using the telescope through a collaboration with MIT/Williams College to observe Pluto’s atmosphere during an occultation. The first science paper from the use of the facility for this research is published in the Astronomical Journal in 2008.

2008, January – Construction of the MRO Interferomter BCF is completed.

2008, October – Mark Swain (JPL), Michelle Creech-Eakman and Penny Boston work on the idea of a spectrometer for exoplanet atmospheric studies at the MRO 2.4-meter telescope.

2008, November – MROI signs contract with AMOS (Liege, Belgium) for the research and development, and construction of the first Unit Telescope (UT).

2009, January – Michelle Creech-Eakman’s team at NMT and Mark Swain’s team at Jet Propulsion Laboratory (JPL) submit an EPSCOR preproposal to NM NASA EPSCoR to fund such a project. A conceptual design (by Colby Jurgenson and G. Vasisht (JPL)) is included and the project is ultimately selected as one of two from NM to be submitted to NASA.

2010, September – MROI signs a contract with L.C. Structural (Las Cruces, NM) for the construction of the first array infrastructure foundations.

2011, March – MRO hosts the Resolving the Future of Astronomy with Long-Baseline Interferometry workshop.

2018, May – MROI The First Unit Telescope Enclosure is delivered and building starts.

2018, July 21 – MROI The First Unit Telescope Enclosure is completed and is integrated with the telescope.