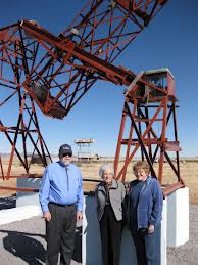 Annette Tombaugh-Sitze, along with her husband Bill Sitze will be joining the panel of judges for the High Altitude Astrophotography Contest at the Magdalena Ridge Observatory. Tombaugh-Sitze, a notable figure in the Astronomy community is the daughter of a world famous astronomer, Clyde Tombaugh. Tombaugh discovered the planet Pluto, (recently reclassified as a dwarf-planet). He also discovered over 800 asteroids, the first object that was later identified as the Kuiper Belt, and was avidly interested in researching unidentified flying objects.

The High Altitude Astrophotography Contest, sponsored by Magdalena Ridge Observatory (MRO), New Horizons West, and Enchanted Skies Star Party (ESSP), will take place on the Magdalena Ridge during 3 days/2 nights on October 10-12, 2012.  The grand prize winner’s photograph will be featured in the Astronomy Magazine, receive one week of free stay at Rancho Hidalgo for two ($1000 value) and a $500 gift certificate to Starizona, 2nd and 3rd place winners will receive $250 and $100 gift certificates to Starizona, respectively.

To enter the contest, the contestant must take the picture from Magdalena Ridge Observatory during the High Altitude Astrophotography Contest event and submit images by 12:00pm on Friday October 12.

The Magdalena Ridge Observatory is a multi-research and educational observatory built and operated by New Mexico Tech. The Magdalena Ridge Consortium Inc. was formed in 1996 with first design for the observatory commissioned in 2000. In July 2004 a memorandum of agreement was signed with the Cavendish Laboratory of University of Cambridge, U.K. The observatory consists of two major facilities: an operational 2.4-meter (fast-tracking) Telescope and the Magdalena Ridge Observatory Interferometer, a ten-element optical/infrared interferometer, currently under construction. Its mission is threefold: conduct astronomical research, provide means for space situational awareness, and educate and reach out to the communities to promote science and astronomical education and interests.

More, prominent judges are expected to join the panel before the commencement of the contest.