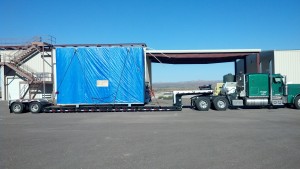 MROI Unit Telescope arriving at the EMRTC at New Mexico Tech on November 1, 2013

The first MRO Interferometer (MROI) Unit Telescope (UT) arrived from Belgium at the New Mexico Tech (NMT) campus on Friday November 1st. The long awaited arrival of the telescope, a major milestone for the project, which has been more than 15 years in the making. The crate containing the telescope was opened on Monday, November 4th at the Energetic Materials Research and Testing Center (EMRTC) and the telescope will be stored there until it is transported to the Telescope Receiving Facility, part of the MRO visitors center and maintenance facility (VCMF) on the Magdalena Ridge at the end of February, 2014.

The MROI will be a ten-element imaging interferometer operating at visible and near-infrared wavelengths, between 0.6 and 2.4 microns with baselines from 7.8 to 340 meters. 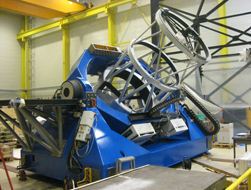 The MROI UT is a movable unit made up of the telescope mount, optics, enclosure and ancillary systems required for routine operation. The telescope mount, designed and constructed by AMOS in Leige, Belgium, is an elevation over elevation design with a fixed output beam implemented using only three mirrors. The telescope will be housed in an enclosure, designed by EIE of Mestre, Italy, features a rigid frame to support the telescope mount during relocation and a unique low profile dome and shutter to allow the telescopes to be placed in very close proximity without obscuring the field of view of an adjacent telescope.

Array foundations at the MROI site

The technical and scientific goals are to produce model-independent images of faint and complex astronomical targets at resolutions over 100 times that of the Hubble Space Telescope.