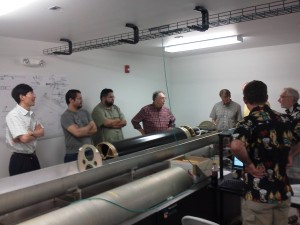 On June 28, 2013  the first delay line trolley, built by the Cavendish Laboratory team at Cambridge University arrived in Socorro, NM for site acceptance verification tests and installation at the Observatory on Magdalena Ridge. The arrival of the trolley is a major milestone for the project because the Delay Line System is one of the essential subsystems of the Interferometer. As part of the beam train system, the delay line is responsible for correcting path delay between telescopes due to the different locations of the telescopes and from atmospheric turbulence. Such corrections are difficult to make as they must be done precisely and in real time.

Following delivery from the University of Cambridge the trolley has been reassembled and placed on its track at MRO laboratory on the New Mexico Tech campus. Initial functionality tests  have shown to be successful. Performance tests will be done in the next few weeks and the trolley is expected be taken to the Magdalena Ridge in early Fall for site acceptance tests.