Home » MRO News » May 15, 2012 – Best Places to View the Annular Eclipse From: Socorro and Albuquerque Areas

On Sunday, May 20, 2012 an annular eclipse of the sun will be visible from a narrow corridor that will traverse the Earth’s northern Hemisphere. The path of the Moon’s antumbral shadow will begin in eastern Asia and will cross the North Pacific Ocean where it will end in west Texas. Most of the state of New Mexico lies in the path of the eclipse providing a rare opportunity for the astronomy community, enthusiasts and non-entusiasts to witness an amazing event. 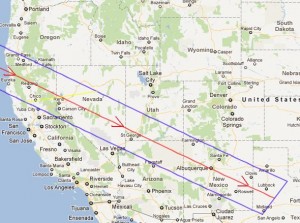 Path of the annular eclipse across the western United States

Here we list some of the best places in central New Mexico to view the eclipse from. Some include public gatherings while others are just remote areas where you can take your friends and family to experience this rare and beatiful event.

Also check out some of the listed references at the bottom page about the eclipse.

Note that the event occurs close to sunset (8:06pm MDT) and when choosing a location make sure you have a clear view of the western horizon; for Socorro residents that means get out of M Mountain’s way!  Be sure to wear proper eye protection when viewing the eclipse.