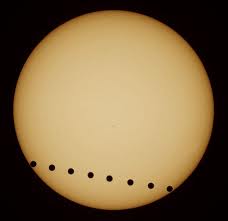 When Venus passes directly between earth and the sun, we see the distant planet as a small dot gliding slowly across the face of the sun.  Historically, this rare alignment is how we measured the size of our solar system. The next transit of Venus occurs June 5 or 6, 2012, depending on your location.  Observers in North America see it the evening of June 5. This will be the last transit of Venus to occur in your lifetime.

A transit of Venus occurs when Venus passes directly between the sun and earth.  This alignment is rare, coming in pairs that are eight years apart but separated by over a century.  The most recent transit of Venus was a thrilling sight in 2004.  After the June 2012 transit of Venus (the last one in your lifetime), the next such alignment occurs in 2117.

Everyone is welcome to join the Etscorn Observatory on the campus for free, safe, telescope viewing of the transit of Venus on Tuesday, June 5, beginning at 4 p.m. until sunset. No reservations required. Feel free to bring lawn chairs, a picnic dinner, water, sunscreen, and your sense of wonder!

To get to Etscorn Observatory, take Olive Lane (main road on campus) toCanyon Road. Turn on Canyon Road heading west toward the golf course. Make a right on Buck Wolfe Drive (first stop sign; just after the golf course) and veer left at the fork in the road. A map of directions is available here. Note: There are signs posted starting on the intersection of Olive Lane and Canyon Road.