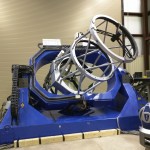 On May 19, 2016, a major milestone was reached at the Magdalena Ridge Observatory Interferometer (MROI) when the first of ten telescopes was installed at the Observatory, perched at 10,460 feet on the Magdalena Mountains west of Socorro, New Mexico. This telescope will be the centerpiece of an optical ten-telescope array that is designed to view the universe in both optical and infrared wavelengths. The telescope was built by AMOS, an optical systems manufacturer located in Liège, Belgium, and shipped from there to the New Mexico Tech campus where it had been stored, waiting for the completion of the telescope […]

(Press Release from New Mexico Tech) Astronomers at the Magdalena Ridge Observatory recently assisted NASA and SETI track a piece of space junk with the 2.4-meter telescope as it impacted the Earth over the Indian Ocean near Sri Lanka on Friday, Nov. 13. Within hours of that project, the MRO team also tracked an asteroid that passed within the zone of Earth-orbiting communications satellites on November 14. “We were doing the work as part of a world-wide collaborative team as a test case for future scenarios to deal with hazardous asteroids that may impact the Earth,” said Dr. Eileen Ryan, […]

The MRO 2.4-Meter Telescope will receive funding from the Federal Aviation Administration (FAA) in early 2016 to monitor the launch and re-entry of commercial space vehicles from Spaceport America, a facility north of Las Cruces, New Mexico. MRO investigators will record and monitor suborbital space vehicles, stratospheric balloons, and other assets. The Principle Investigator and Co-Principle Investigator of the grant, Drs. Eileen and William Ryan, have extensive experience with tracking fast-moving natural and man-made objects in orbit. An undergraduate student from New Mexico Tech’s Mechanical Engineering Department will assist with software development for closed-loop tracking of fast terrestrial targets with the […] 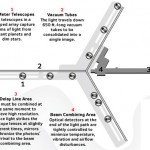 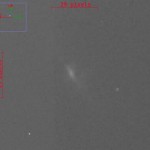 In late September and early October, Dr. Michelle Creech-Eakman spoke to members of the Las Cruces Astronomical Society at Doña Ana Community College and a colloquium at Lowell Observatory in Flagstaff, Arizona about exoplanetary astronomy and her work with the New Mexico Exoplanet Spectroscopic Survey Instrument (NESSI). NESSI is a highly sensitive ground-based instrument mounted on the MRO 2.4-meter Optical Telescope that studies the atmospheres of distant planets. The ultimate goal of Creech-Eakman’s research is to discover planets with biosignatures like oxygen, water vapor, and methane in their atmospheres, all signs of habitability. While in Flagstaff, Dr. Creech-Eakman also worked with Dr. Gerard van […]