On May 19, 2016, a major milestone was reached at the Magdalena Ridge Observatory Interferometer (MROI) when the first of ten telescopes was installed at the Observatory, perched at 10,460 feet on the Magdalena Mountains west of Socorro, New Mexico. This telescope will be the centerpiece of an optical ten-telescope array that is designed to view the universe in both optical and infrared wavelengths. 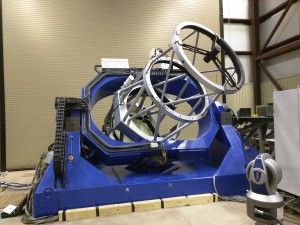 The first 1.4-meter telescope of the MROI in the Telescope Receiving bay.

The telescope was built by AMOS, an optical systems manufacturer located in Liège, Belgium, and shipped from there to the New Mexico Tech campus where it had been stored, waiting for the completion of the telescope commissioning facility at the Observatory, and also for warmer and drier Spring weather.

On May 17, 2016, the 15-ton telescope had begun the final leg of its journey to the Observatory. It was hoisted onto a 40-ft. trailer which left the warehouse at the New Mexico Tech Energetic Materials Research & Testing Center (EMRTC) at 11:00 am in the morning, traveling through the EMRTC Test Range, and arriving at the US60 highway just after noon. It then took four hours to transport the telescope up the single-track, unpaved 8 miles of Forest Road 235, which climbs over 4,000 feet, to the Observatory on the South Baldy Ridge of the Magdalena Mountains.

Dr. Van Romero, Vice President for Research and Economic Development at New Mexico Tech, and the Principle Investigator of the Interferometer, puts the achievement in perspective: “Moving the first interferometric telescope to the Observatory is a monumental step forward. Up until now we have been working on the mechanical aspects of the observatory. Now we begin the transition into the optical systems.”

Magdalena Ridge Observatory Program Director, Dr. Ifan Payne, praised the work of the project staff. “Many people have worked for many years to get to this point, so it is both an exciting milestone for the project and a testament for the dedication and professional skill of the engineers and scientists involved.”

The telescope was scheduled to be unpacked from its shipping crate, following the arrival of a 120-ton crane, but the poor weather caused delays. Storms reduced visibly at the Observatory to 100 feet and then it began to hail, which developed into a snow storm – in May! It had been planned that the shipping crate would be dismantled outdoors and the crane would then lift the 15 metric-ton telescope into its temporary home in the Telescope Receiving area of the Maintenance Facility, but the long storm and a bad weather forecast forced the decision to end the work and for the scientists and technicians to return down the Forest Road while it was still safe to do so.

Installation of the telescope resumed on May 19, 2016. It was unpacked and lowered onto five special, motion-dampening foundations. The kinematic foundations that the telescope sits on are separated from the building’s foundation by several inches of specially-designed silicone compound. This allows movement of the individual mounting points while ensuring that the telescope remains locked into position relative to other telescopes in the array.

Once the telescope was in position, work started on the long and delicate task of installing the three mirrors which comprise the optical path within the telescope. The primary mirror, which is the largest, is 1.4 meters in diameter.

“Site Acceptance Testing will take six weeks, after which there will be a lengthy commissioning process leading eventually to first light”, explained Dr. Payne.

The Magdalena Ridge Observatory (MRO) is located on 1,000 acres, on a ridge adjacent to the 10,700-foot South Baldy peak of the Magdalena Mountains in Socorro County, New Mexico (NM). This multi-use research and educational observatory is built and operated by the New Mexico Institute of Mining and Technology (NMT), with offices located on the NMT campus in Socorro, NM. The MRO consists of two major facilities: an operational 2.4-meter fast-tracking telescope (MRO 2.4-Meter Telescope), and Magdalena Ridge Observatory Interferometer (MROI), an optical array of 10-1.4 meter telescopes that is designed to simulate the resolution, (magnification, or detail) of a single telescope, ranging in size from 7.5 meters to 340 meters in diameter. When complete, the MROI will have 100 to 200 times the resolution of the Hubble telescope at only 2% of the cost of that space telescope.

The mission of the Magdalena Ridge Observatory is to support astronomy research, space situational awareness, and educational outreach.

“As we progress, we will start to collect light which is always a significant step forward,” says Dr. Romero. “We are now one step closer to collecting science data in support of our goals.” 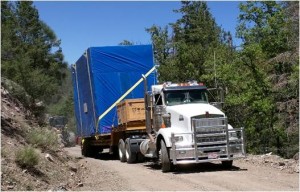 The telescope traveling the 8 miles up Forrest Road 235 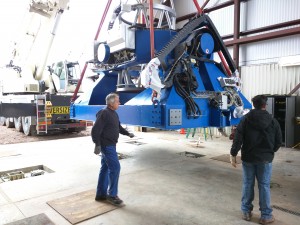 Hoisting the telescope off the truck and into the Commissioning Hall. 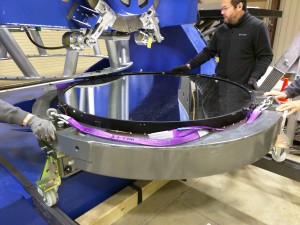