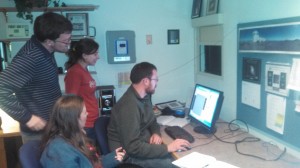 NESSI team working hard to get first light on NESSI

In the past, exoplanet spectroscopy was only possible with space-based telescope. NESSI is one of the first ground-based characterization instruments and is attracting attention from astrophysicists around the world, placing MRO in the forefront of exoplanet research.

NESSI is a spectrometer designed, built, and optimized for probing chemical composition of atmospheres of exoplanets—planets orbiting distant stars, outside of our Solar System.  Using spectroscopy to observe exoplanets’ atmospheres allows astronomers to study the molecular composition of the planet’s atmospheres, making it possible to identify the presence, and quantify the abundance, of oxygen and carbon-bearing molecules, as well as temperature and winds.  NESSI will observe exoplanets in our galaxy, most of which are within 100 light years from our Solar System. 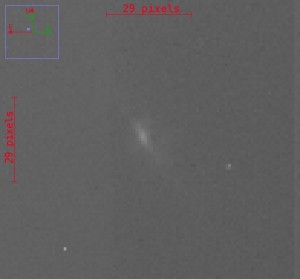 Pollux, a bright start in the Gemini constellation was the first target NESSI achieved first light on.

During the first night’s observations, NESSI collected light from several targets, including some bright stars and globular clusters. Pollux, a bright start in the Gemini constellation was the first target because it has a good infrared signal for the detector.

“First light is always a big moment for any new instrument. The team is very excited about getting light through the system, and the performance is great,” said Dr. Michelle Creech-Eakman, the Science Principal Investigator and MRO Project Scientist.

“The new instrument brings diversity to the observatory’s capability, which is vital in today’s competitive funding environment. But, more importantly, it brings new science to our campus, which means new opportunities for our students,’ said Romero.

NESSI installed on the 2.4-meter telescope

The optical and mechanical design was completed at MRO with collaborators from Jet Propulsion Laboratory (JPL) in Pasadena, CA. Most of its fabrication was done in Arizona and New Mexico and the instrument was assembled at the MRO optics lab located on the NMT campus.

“Getting first light was a strangely serene experience.  We spent all of this time with the design, fabrication, assembly, and installation – also the prep work for the observations themselves,” said NMT Physics graduate student Heather Bloemhard.

Exoplanets were first suspected to exist as early as the 19th century but the first confirmed discovery did not occur until 1988. Since then hundreds of exoplanets have been uncovered orbiting their host stars and scientists are now moving from the discovery phase to the characterization phase. 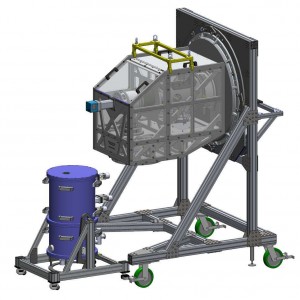 NESSI is unique, as its design has been optimized to have very few moving components, which allows for great stability and to have sensitive detectors with which to measure the exoplanet atmospheres.

Now that NESSI achieved first light, the team plans to continue using the instrument to take spectra on many types of objects, including stars, brown dwarfs, planets, and other galaxies.  It also has imaging modes and the team plans to test these capabilities.

30 nights have been allocated to studying exoplanets. Each target requires ½ of a night to collect full spectra.

“There has been lots of excitement and interest about NESSI from groups of folks interested in measuring exoplanet atmospheres, and so that is our main goal. Other folks will undoubtedly want to try other science, so how much gets done with NESSI will depend on getting on the 2.4-meter telescope,” says Creech-Eakman.

2.4-meter telescope building on top of the Magdalena Ridge.

The MRO 2.4-meter telescope became operational in late 2007 and is primarily utilized to observe, track, and characterize solar system astronomical targets, artificial Earth satellites, space vehicles, and terrestrial military targets. It is located at 10,600 feet in the Magdalena Mountains of the Cibola National Forest, approximately 30 miles west of Socorro, NM.

MRO was formed in 1996 as a consortium with plans to build and operate a 2.4-meter telescope and a 10-element optical and NIR interferometer (MROI).