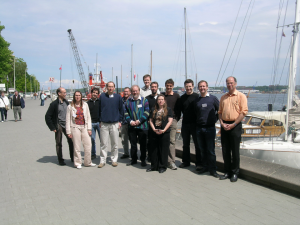 MROI project scientist, Dr. M. Creech-Eakman, is a co-author of a paper, Circumstellar disks and planets. Science cases for next-generation optical/infrared long-baseline interferometers which will appear shortly in the “Astronomy and Astrophysics Review”. The paper details how current optical and infrared interferometers can contribute to theoretical issues associated with the formation and evolution of stars and planets. The data obtained from the interferometers will also help to discriminate among competing models of the processes involved in the evolutionary processes. The paper also details how this work will complement studies taking place at other facilities, such as ALMA and JWST, over the coming decade. The paper is the result of a European Interferometry Initiative OPTICON FP7 sponsored workshop in Kiel, Germany in May 2010 hosted by Dr. S. Wolf and Dr. F. Malbet.

For more details on the workshop:
http://www.european-interferometry.eu/working-groups/circumstellar-disks-and-planets 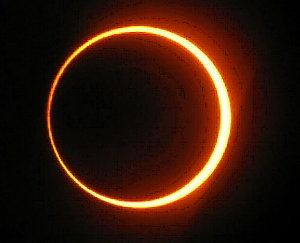 On May 20, 2012, a swath of the midsection of the Western US (and also the Pacific Ocean and Asia) will experience an annular solar eclipse. At 10,600 feet above sea level, the Magdalena Ridge Observatory has one of the best astronomical seeing conditions of any observatory in the United States so, weather permitting, we should be able to enjoy one of the best views of the of the eclipse possible in the entire country.

Solar eclipses, whether total or annular, occur when the Moon passes directly between the Sun and the Earth casting its shadow on the Earth. Not all planets experience eclipses; the necessary ingredients include a moon in the right geometric position and a moon that is big enough so that it can cast a shadow on the planet from the star’s light. On Earth, solar eclipses always happen at the “New Moon” phase. But solar eclipses cannot happen at every “New Moon” phase because the Earth, Moon and Sun all have to be in the same plane and the separations must be in the right ratios for the sizes of the Sun and Moon to be well-matched. The changes in sizes occur because the Moon’s path around the Earth is elliptical rather than truly circular. 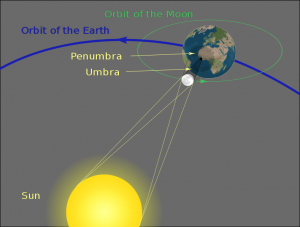 Geometry of a total solar eclipse (not to scale).

The deepest part of the shadow of the eclipse is called the umbra (from Latin for “shadow”), while the less dark part along the sides is the penumbra (“almost shadow”) and just past the umbra is the antumbra (“behind shadow”). If you are in the umbra path, you experience a total eclipse, while in a penumbra you see a partial eclipse. Many eclipses, however, occur in the antumbra, when the Moon is farther away from the Earth than during a total eclipse, so the umbra misses us.

An annular eclipse diagram occurs when the Moon covers the center of the Sun but not its edges leaving a ring (annulus) of the Sun visible around the edges.

The Moon has always been an important celestial object for early civilizations as it was used primarily to tell time especially for planting, harvests and festivals. Many of today’s modern calendars are lunar in their origins and in fact the English word “Month” has the same root as the word “Moon” and refers to the 29.5 days of a lunar cycle. The ability to predict eclipses has been enjoyed by almost all civilizations which have an interest in the celestial objects and mathematics. The ability to predict solar eclipses has also been used by leaders of countries over time as an indication of connection with “the divine” and so legend and mysticism are sometimes combined with eclipses. The prediction of eclipses has been used to manipulate people, often as portends dangers to come.

Today, eclipses are frequently considered an event of historical interest and an opportunity for people to learn more about celestial bodies. Scientists use solar and other types of eclipses to test scientific theories and study atmospheres of the Sun (or in the case of other types of eclipses, other stars or planets). When an eclipse blocks out bright light from the sun or a star, just the edges of the light from the star can be seen. This light is used to study phenomena like coronal mass ejections and magnetic loops on the Sun and also the atmospheres of other stars.

New Mexico Tech undergraduate student,  Kelsey Miller was recently accepted into the Ph.D. program at the College of Optics Sciences at the University of Arizona in Tucson, AZ. Born and raised in Albuquerque, NM, Ms. Miller came to New Mexico Tech as an Astrophysics major at the Physics Department in August 2008 and joined MRO in September 2011. She was a recipient of the NMT Silver Scholarship and is due to finish her B.S. in May 2012.

While at MRO Ms. Miller worked on modeling an aberrated atmosphere in ZEMAX and analyzing the output in Matlab. Her results will help inform the design of the MRO countinuous alignment system, BEASST (Back End Active Stabilization of Shear and Tilt) for the Interferometer project.

After her graduation in May, Ms. Miller will be departing MRO. She is intending to study adaptive optics and astronomical instrumentation as part of her Ph.D. dissertation.

Design work has now commenced on the MRO Visitor Center & Maintenance Facility. URS Corporation  and SMPC Architects will provide the engineering and architectural design services. With approval from NM-DOT, a contract was signed and a kick-off meeting took place on Monday, February 13th. This was followed by a site visit and conceptual design workshop at the MRO Offices on the New Mexico Tech campus on February 16th.

The MRO Visitor Center & Maintenance Facility will be located at the observatory site in the Magdalena Mountains. The building will be approximately 5500 square feet with both public spaces for visitors to the research site as well as storage and maintenance space for the observatory’s heavy equipment and road maintenance fleet. The MRO
keeps Forest Road 235 open year-round to support operations at the observatory.

The design of the facility is scheduled for completion in June of 2012, with construction starting in August of 2012. The building will be complete by October of 2013.